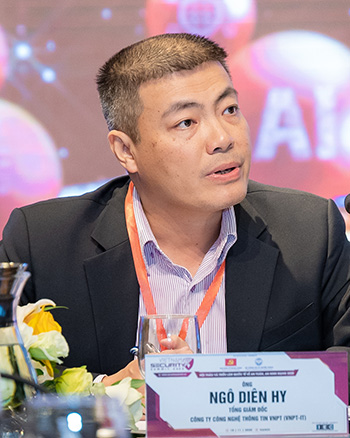 In the past, Mr. Hy won a bronze medal at The International Mathematical Olympiad in 1991. He earned bachelor’s degree in Information Technology from Hanoi University of Science and Technology in 1996, and Executive MBA from Shidler College of Business, The University of Hawaii in 2010.

He joined VNPT Group in 1996, has more than 24 years of senior management positions in Research and Development, Deployment and Operation a lot of ICT systems with wide areas: Telecommunication, Enterprise, Healthcare, Education and eGovernment… He is also known as an expert in Digital Transformation, especially for Government and Enterprise.

As a pioneer in VNPT’s Digital Transformation Strategy, he has got the trust from the Board for founding and rapidly growing Digital Service Subsidiaries in the Group: VNPT Media Corporation in 2015 and VNPT-IT in 2018. With strategic vision, he has been giving directions to research, development and application of the top Industrial 4.0 technologies: AI, Big Data, Block Chain, IoT, Cloud Computing into VNPT-IT’s digital products.